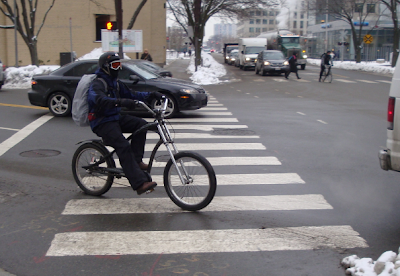 Got to give him credit - he was out riding today!
3 comments:

Crazy question for you all

I got this email from a friend of mine, and am stumped by the "under bike shorts" part of it. I don't usually think of wearing underwear with bike shorts:


I have a very crazy question for you. My dad has decided that he is going to do the cross-country bike ride starting in March, and he was just over here asking my husband a lot of questions about gear etc.  Dad mentioned that a few years ago my mom gave him some underwear that had a leather insert and those were the most comfortable underwear he ever had for wearing under bike shorts. He said they were like the same kind of underwear that horse jockeys wear or something.  We had no idea what he was talking about, and I'm sure you can imagine what came up when I googled "leather underwear" and the results actually got worse when I added "horse jockey" to the search terms.

Of all the people in the world that might have an idea of this product that my dad is talking about which lives in the intersection of the Venn diagram for cycling, horse riding, and appropriate undergarments for all activities, you have to be one of the best :).  So - any idea what he's thinking of?

So my cycling friends, any thoughts? Is Dad thinking of just old-school chamois or is there some other garment out there, hidden behind all those photos we don't really want to look at?

Thank you for any leads!
14 comments: 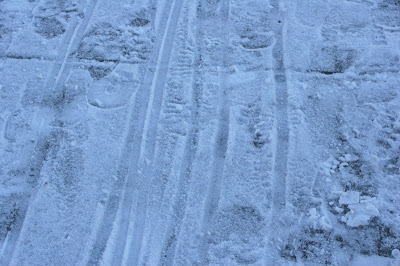 So, do you think there were bicycles here, or was it something less exciting?
5 comments:

Happy day but no photos

Today I got to ride for the first time since the big snowfall last week. What a relief it was! I was in a much better mood all day and I honestly felt safer in the street - the plows and salt/sanding made the road surfaces much more consistent than the sidewalks and by avoiding rush hours I had no problem taking the lane when needed.

Beacon Street has a de facto bike lane. There's so much snow that the normal parking spaces are filled and the cars are parked in the travel lane, leaving a bike lane's worth of travel lane free and clear. It was perfect!

I can also confirm empirically that with my old metal pedals there is no problem wearing YakTrax while riding. Indeed in the few times I walked my bike for safety I was glad I didn't need to stop and put these on. They were there when I needed them and did not catch or snag on my pedals while I was riding.

My husband has the camera on a business trip, so I regret that we will continue to be light on photos here at Chic Cyclists, but I hope to soon be able to share images of some of the hardy souls I've been seeing out and about - and their extra-tough bikes!

Today is a snow day, hurray! I'm warm at home with some tea and a little extra time to ramble on a blog.

Over the holidays, due to elaborate circumstances I won't get in to, I ended up driving to work for several days in a row. That was surprisingly an enormous gift I won't soon forget, and something I'd like to urge every cyclist to do from time to time. (Boston Biker did the same, but I can't find his post. Boo.)

There are lots of complaints about how poorly cyclists are treated by drivers of cars. I was driving during a low traffic period (between Christmas and New Year's) and let me tell you, between cars the lack of civility was much worse. I was thrilled to get back on my bike and the relative civility of the bike-car interaction. In a car the hostility, the jockeying for position, the never-ending competition of it all was exhausting.

In addition to showing me how uncivil drivers are to each other, my few days driving was a wonderful reminder of what it's like to share the road with a cyclist. I saw the same spots where I feel pinched each day from the driver's perspective and it helped me understand how the conflicts can arise.

I'm sure I'll complain about rude drivers again, but I hope to remember this surprise Christmas gift and to maintain a more expansive view of sharing the roads in Boston.
5 comments: 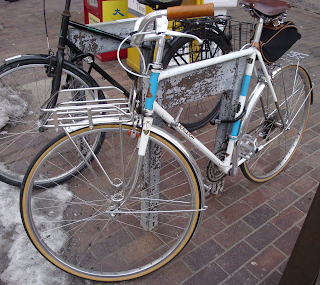 As a Raleigh fan, of course this Carleton-made Reynolds 531 Gran Sport caught my eye as it was parked in Kendall Square. It's been updated in a manner consistent with my personal preferences to make an attractive, practical city bike. 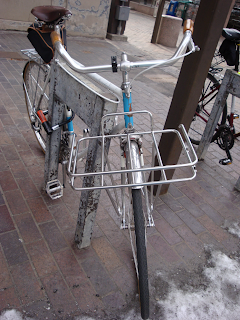 I was particularly delighted to see such a functional front rack, and all the more happy when I got back to my desk and saw that there is currently a coupon available for exactly this rack: Velo Orange Porteur Rack 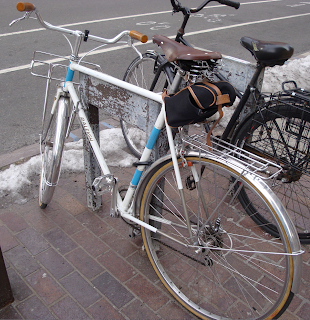 The whole bike seems to have been updated with Velo Orange parts - racks, grips, handlebars, saddle, bag, and I particularly like those chrome fenders. 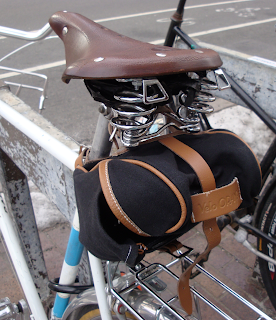 I'm not sure about the bag though. It is looking a lot floppier here than my Giles Berthoud bag, on which it was modeled. I would be interested in speaking with the owner of this bike and learning how much exposure the bag has taken. It's all academic though, while one thing is certain - this bike will catch your eye, even if you're running late. Gotta go!
10 comments:

Link: How to talk about cycling with a Conservative

This was sent to me by a liberal friend, and I'm finding it amusing enough, and general enough, to want to share it:
How to talk about cycling with a Conservative

These "across the aisle" arguments have worked for me in the past and, except for continuing to (lightly) include the climate change issue, I think I've largely embraced this more widely accepted set of points, and certainly moved into the national security as related to dependence on foreign oil realm when discussing the global implications of tiny choices at home.

I think my favorite line in the article might be:
"Note: Some business suits actually contain trace amounts of Lycra and Spandex."
Go read the article, you'll see...


"people who choose to ride should be able to do so safely, as taxpaying citizens worthy of full protection of their individual rights to life, liberty and the pursuit of that special kind of happiness one gets from riding a bike."

(Note, I looked into the Edison video and it was FILMED by Edison, but he's not actually riding the bike)
12 comments: