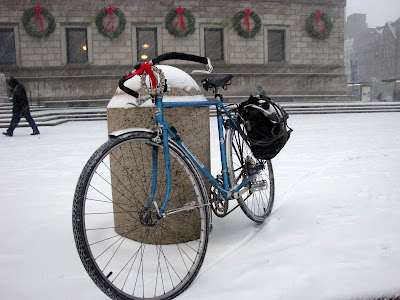 Chic Cyclist is going to take a hiatus 'till the New Year. We wish you joy in all the holidays you celebrate.

Best Wishes from Boston to the world:
Peace on Earth, good will to all.
9 comments:

Sent in by alert reader Carice: 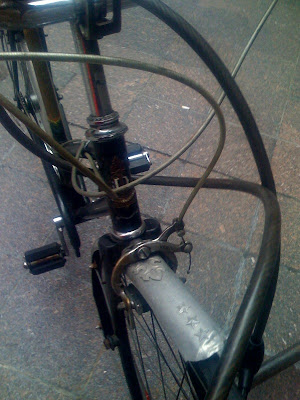 Thanks Carice, for sharing these fenders! I actually know this bike, it belongs to the man who sold me my Dawes. Small world.
Thanks for the great photo!
3 comments: 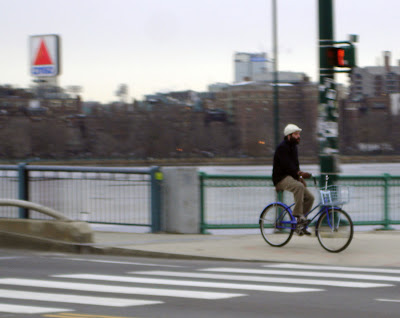 Winter cyclists, don't forget to take your hands off the handlebars and stretch and move them, rub them together, whatever, to keep the blood flowing. 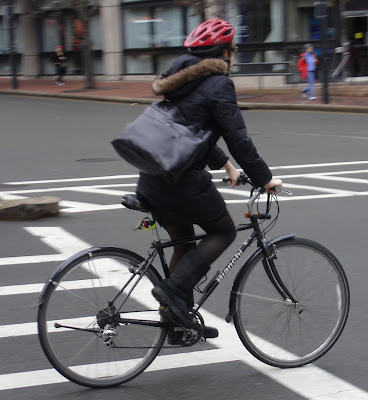 Stockings and Uggs are a unique combination, to my knowledge unseen in Europe but increasingly common in the States (I have no data on this trend Downunder). This is a practical way to get where you're going toasty warm, then change into tiny stilettos once you've arrived. 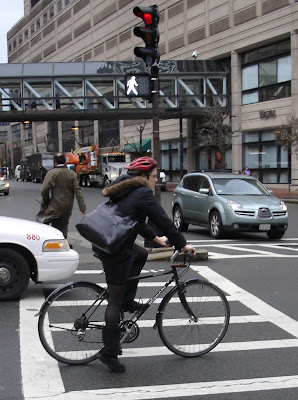 This dad has great taste in bikes 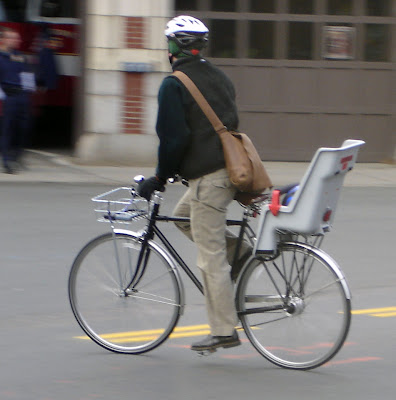 Dad and his nice bike just dropped Junior off at day care. He's not wearing a cycling cuff, he has a chain guard to go with what looks like an internally geared hub.

I rode in, but I wasn't stopping to take any photos. Sorry.

Instead I have for you indoor bicycle shots, specifically the clever bike racks used at Bikes Not Bombs to hang bicycles in the hallway. The beauty of these homemade racks is that the bike hangs at an angle to the wall, allowing greater space for passage of humans in the hallway.

Here's the overall view of the racks: 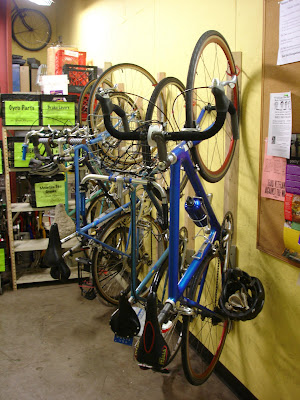 The hooks are staggered to put cranks at different levels and thus allow more bikes to fit in a smaller space: 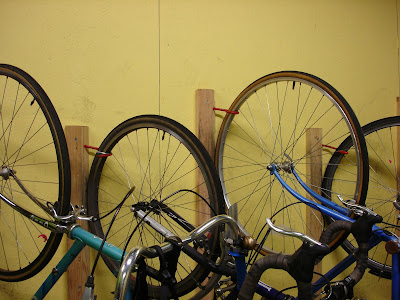 The hook is sunk in a triangular piece of wood which is then mounted on the wall. I'd guesstimate that the bike leaves the wall at a 45 degree angle. 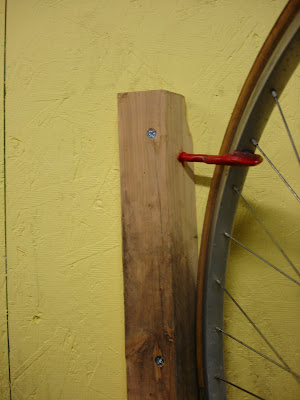 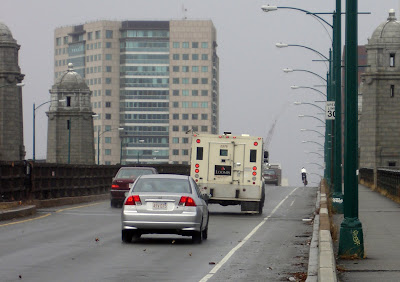 I'm liking the idea of white outerwear for being visible but not flashy, particularly paired with black. It might be even better in the summer when the world is more green, less grey...

In this photo you can see the challenge of twin cities on a river: who is responsible for the bridges? I don't know, but I do know that the sidewalks on the Longfellow Bridge are not shoveled until at least 2 weeks after any major snowfall. Seems the street cleaners don't pass too often in the bike lanes either.
2 comments:

Red and White - Coat and Bike 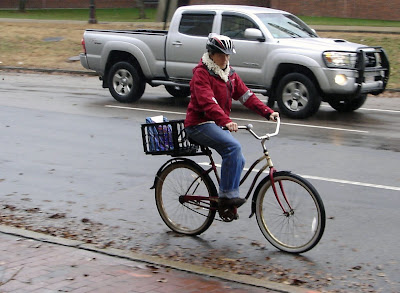 Today we get a reprieve from the cold, neither of us were wearing gloves. It's wet but glorious out! Winter will make one so grateful for small pleasures.
1 comment: 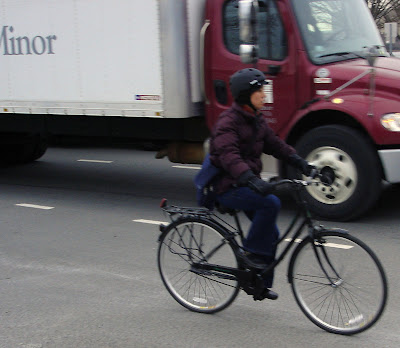 She was making her way to work as the little snowflakes filtered down early this morning. 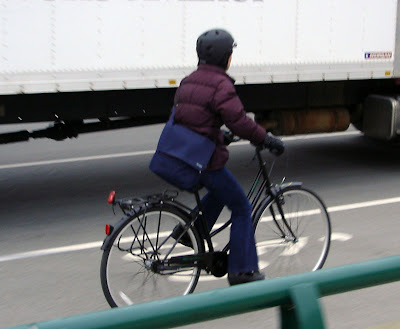 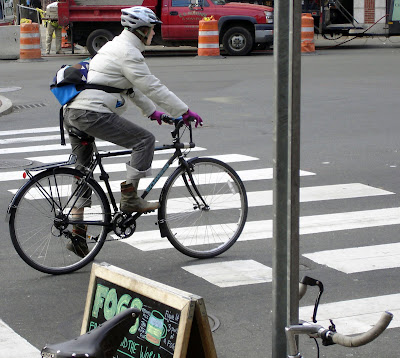 Fusion Style on a bike 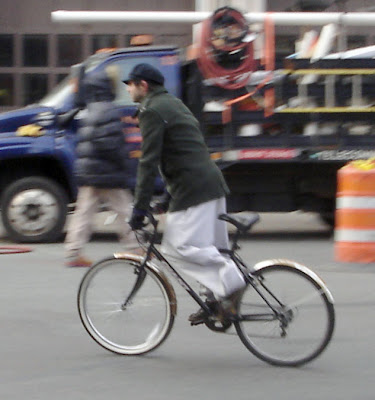 I'm not sure what to call this style of trouser, I'm sure I've never seen them before. I'm not sure they're the best for cycling but they do make for a change from the ordinary. With the military-style jacket they seem a bit 'marital arts' to me, making the trousers seem a bit like something one would wear for aikido.

His beaded wallet leash reminds me of Kombolói. 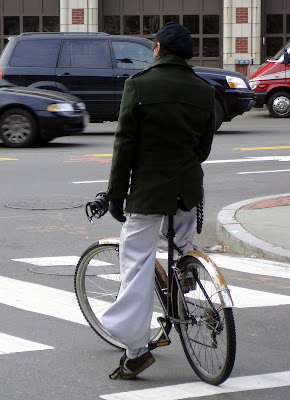 All in all, a distinctive look!
4 comments: 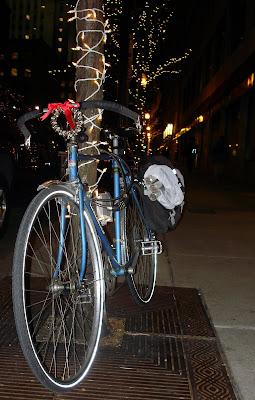 Christmas lights, wrapping paper in the bike bag, decorated bike... all very festive. I've seen people reporting that their bikes are "lit up like Christmas trees" - anyone out there take the Christmas tree analogy any further?

I get lots of compliments on my little bells, and lots of smiles. I'd love to see other festive bikes.
5 comments: 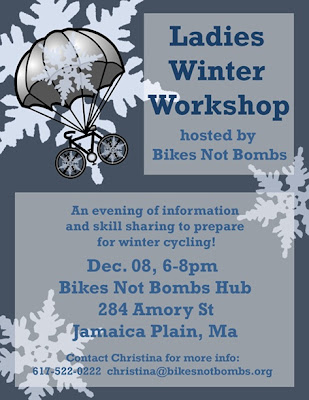 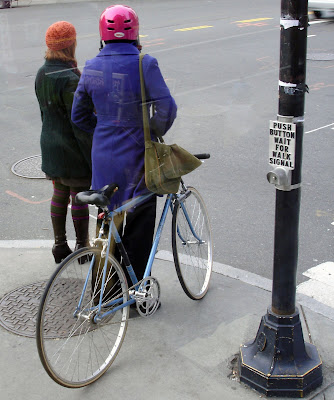 This was taken through a window, there's a slight bit of reflection in the image.
3 comments:

My friend E sent these photos taken just for us on her recent trip to Norway. She's currently living in Iceland. I'd love to see some Icelandic cycle chic, particularly in winter...

Anyway, we hope you all enjoy these photos.

Bicycle parking outside the Lillestrøm train station, Norway (She confesses here that she misses New England - New England misses you too E!): 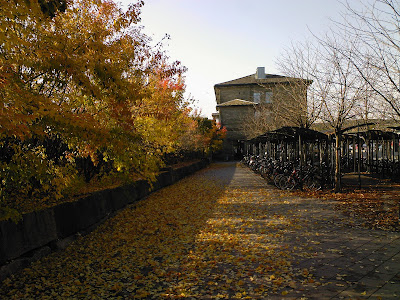 A clothing store display in Kastrup airport, Copenhagen (Not Norway...) 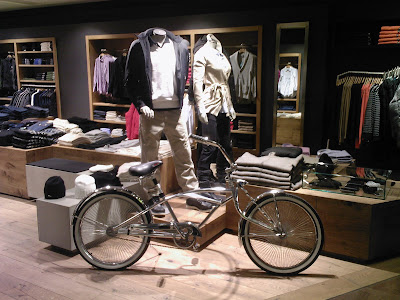 The bicycle parking lot at Nye Ahus, a freshly built hospital outside Oslo: 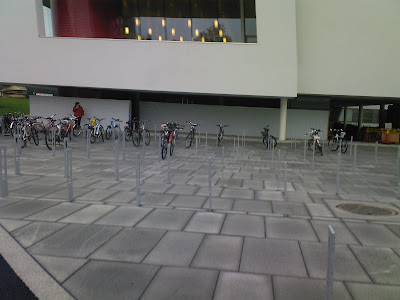 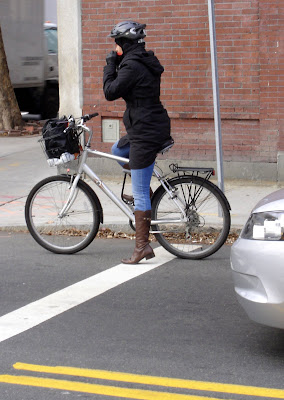