Last night was the coldest ride in a long time.
The reasons are complicated, but for the moment I have the old style black brake blocks on my front brake and salmon Continental Kool Stops on my rear brake. On the ride home my face was frozen, the bottoms of my non-skid Dansko clogs were frozen, the black brake blocks felt like ice cubes scraping against my rim... but the Continental Kool Stops performed like it was an afternoon in June. It was incredible. I'm fully converted.

Speaking of conversions, I have a set of Kool Stops for the front brake, I was going to install them with my new front wheel. More on that soon!
5 comments: 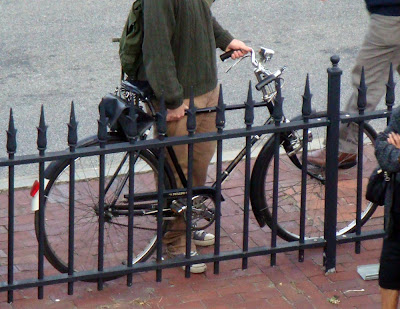 We're not spending much time outside these (cold) days, but I did see this handsome bike.
9 comments: 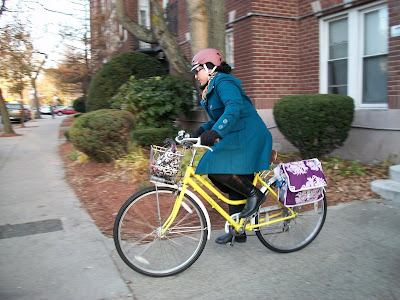 I was so happy to get this submission from a chic Boston cyclist. I love it all, but perhaps the coat the most (that's my favorite color). Looking good is its own reward, but I still want to say WELL DONE!
7 comments: 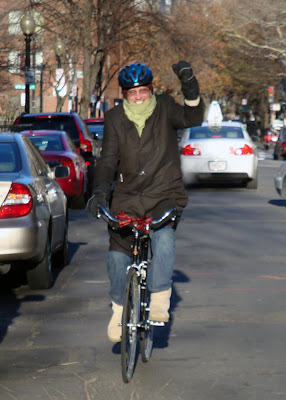 Dad's bike is a complete success, but I might actually be even happier than he is.

He's out riding it today, in this frigid weather, so I know he really likes it. 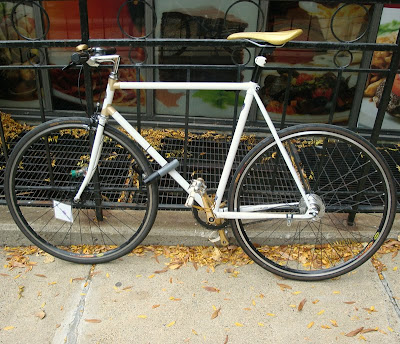 Spotted on Newbury Street, this bike impressed me with its confident use of gold. 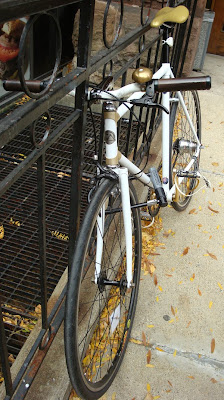 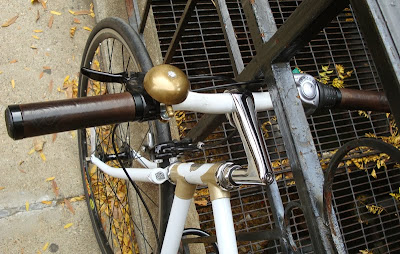 I am lucky enough to have a brother-in-law who is a historian. He sent this wonderful gift for all of us. What amazes me while reading this is how very similar Ethel's journal entries are to the entries and comments in modern chic cycling blogs. The more things change...!

Today I came across a journal of a chic cyclist from 1897, and wanted to share some of it with your blog. In her day a bike was referred to simply as “a wheel”. Attached are two scans from the journal as well.

Selected entries from the journal of Ethel Starr Mack of Benton County, Oregon, 1897: 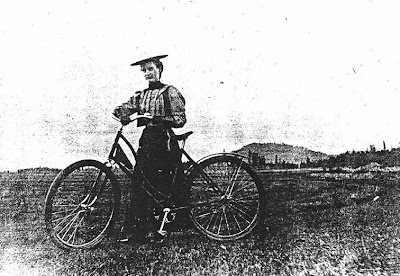 April 8: I worked today on a wheeling suit which I am making of my old blue dress. I am making a sleeveless Eton jacket with a sailor collar trimmed in white braid. I think I shall like it quite well…. We have heard that our wheels came to Lebanon [Oregon] today, by stage.

April 12: Our wheels came today. Mine is a beauty! The prettiest wheel in town, so everyone says. It is dark green with dark red and black lacings. I can ride already. I learned in the College hall – after practicing half an hour I could ride across the Hall. After three-quarters of an hour I could go around the hall. After school tonight Effie Holt and I went up to the Hall with our wheels but so many were riding I could not try mine, so Herschel, Effie and I went down to the college track. Soon the whole crowd followed. There were nine wheels on the track! I rode around it several times but I did not have strength to ride more than once and a half around the baseball diamond without resting. Herschel looks the best of the boys on his wheel. They all said I learned remarkably fast. Herschel took supper with me and Ali, Wayne and George and Amy were there besides spectators. We had a nice time and I rode five miles and was not much tired. Herschel and I came back together and went to the spring for a drink.

April 20: I sewed some on my machine today and it works nicely. I am making a shirtwaist of my old blue chambray skirt to wear with my wheel suit….

April 21: Herschel took me down to the track and we rode together. I rode seven miles and at once I rode a mile and a half without stopping. Herschel and Gilbert went to Albany today and got them new wheel suits. Herschel looks so handsome in his. He has gray pants and a red sweater and stockings….His wheel cost him $22.50.

May 1: This being May Day I made a May basket of green and white crepe paper lined with pink, and filled it with flowers.

May 2: Mama told me to take my wheel and go to the track. I did so and Allie and I rode four miles without stopping.

May 7: Herschel came down and we started out for a ride. It was my first attempt to ride on the road. I wore my new wheel suit for the first time. We found the first mile too rough for riding but after that it was nice. Coming back we sat down under a tree to rest, and Herschel graded an examination paper. I was not much tired when I reached home and Herschel praised my riding. It was altogether the happiest ride I have taken. 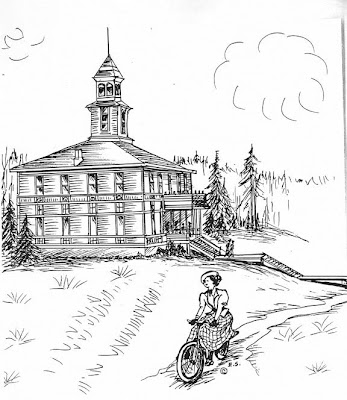 As an aside, when I googled "Ethel Starr Mack" I was happy to see that she's buried alongside her husband Herschel. Long live bike romances!
15 comments: 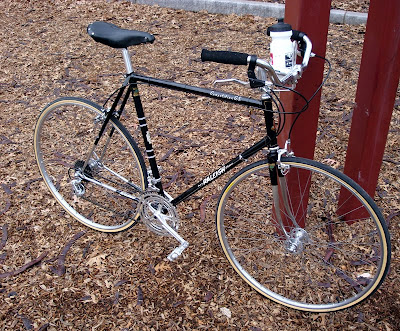 Zeus is mostly done! All the rest of the work will be customizing it for Dad.

This bike is SO MUCH FUN to ride. It's a little tall for me, so I feel like I see forever. I haven't loaded it down with racks and bags so it's light and quick and it really does Zoooom! 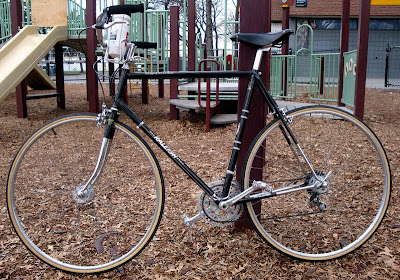 I took these photos at a playground because Dad is telling everyone about how he's getting a bicycle for Christmas. He sounds so happy when he says it, and he also sounds like he's about 6 years old. It's adorable. Aren't bikes great?

The bike shifts well. The stem shifters work great (10 on the tree, instead of 3!) and I think we have the derailleurs adjusted so he can't throw the chain.

I'm not sure the gearing will be perfect for Dad, but that's the work of time. I'm happy we'll get to ride around together while he's here and work out these details. I look forward to sharing what I know about bikes, just as he once did about vintage cars. And just as I learned all the tricks I needed to get the old machines he gave me running, he's going to have to learn the delicacy of shifting this old friction system. The thing is, unlike the pink and grey wedding cake Edsel he wanted to give me when I turned 16, these old vintage machines are a bit cheaper to keep running! But I do think he will have an appreciation for it. 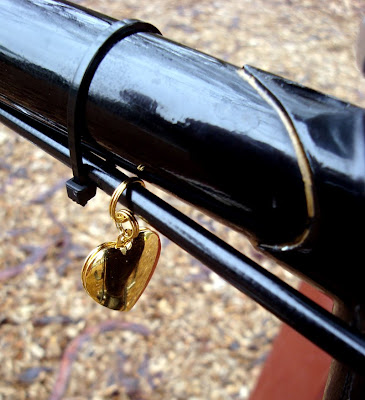 All this started when Dad had his heart attack and bypass surgery so I got a gold-plated locket on Etsy and went down to our local bead store for a gold-plated split ring that was large enough to slip over cable housing. Inside I've left a message for Dad. 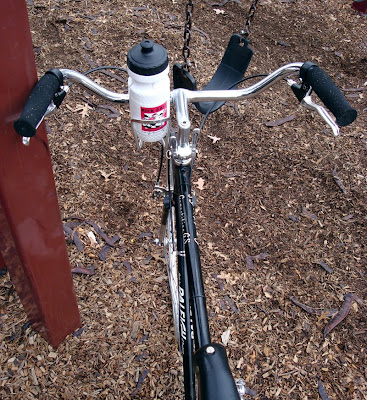 As suggested, I may switch the water bottle to his non-dominant hand. I know he's going to love the cork grips, they feel really nice. The cheap Wald handlebars are wide for my slender lady shoulders but I highly recommend them for men. 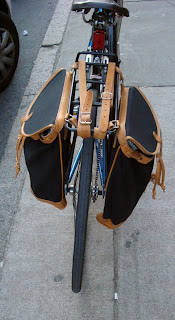 Spotted on Newbury Street this weekend, these pretty panniers appear to be DIY.

I can't imagine where s/he found such perfect bags - they look purpose built with that flat side for hanging against the bike, and look like they match all the Gilles Berthoud bags. Yet the attachment system is certainly not ideal. I wouldn't want to ever need to unloop all those straps threaded through the rack. I suppose it wouldn't be hard to rig a set of hooks instead, if one could find bags like these.

Does anyone know these panniers? 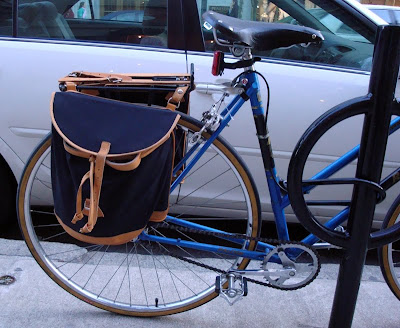 I feel badly, I just plain haven't had time to bring you more images of chic cyclists. Between the darkness, work, and my time working on this bike, this bike is all the news I have.

OH! But, if any of you are riding over the Mass Ave bridge towards MIT this morning, keep your eyes open on the MIT side. The entire bike lane has been strewn with Scrabble tiles. I saw the letters to make "wars" or "raw". Let me know if you see any words on your trip.

OK, on to interim project photos. 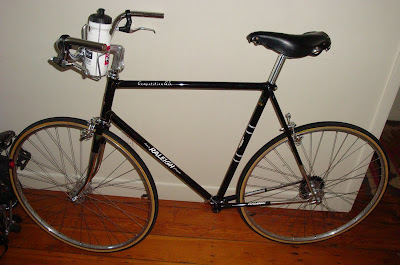 Here's the bike as of this morning.
I had the headset put on, but everything else I've done myself. I'm extra proud of this bike and look forward to finishing it. 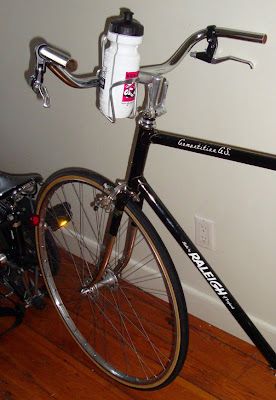 Here's a view of what Dad will see. We'll probably add a light and I'm debating on one of those pretty Crane bells. I have black cork grips I will put on at the very end, when everything is adjusted. 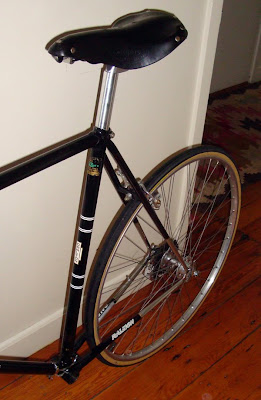 Every time I really look at these bands of white on the seat tube I think I should change the gumwalls I already had to whitewall tires. Maybe next Christmas? These gumwalls have only about 20 miles on them.
That's a Wright leather saddle we had kicking around. In 1962 Wright and Brooks merged into something called the Raleigh Saddle Division (according to this PDF from Brooks). 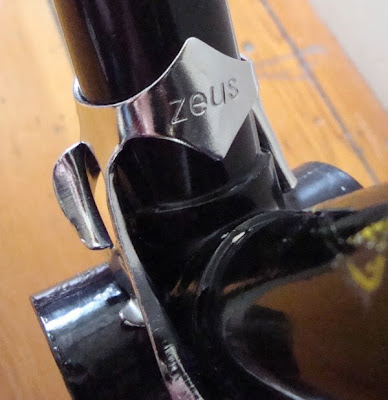 The Zeus clamp-on double cable guide I got last night. It is SO CLOSE to closing! I just tried it on the bike before work, so we'll go back tonight with pliers and try to get the existing screw to close it. If not I think we can get another just a mm or two longer which will do the trick.
This guide is a knock-off of the Campagnolo ones, and I held it up to one on my International. It's not as nicely made but all the angles are the same so I think it will function just fine.
My dad is a life-long fan of Greek history (his name is Alexander) so we've now dubbed this bike "Zeus", but you have to say it like "Zooom!" since the bike will be so quick. So the bike's name is really "Zooos!" 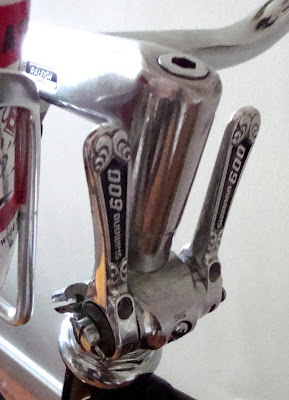 The ladies at Bikes Not Bombs helped me dig through the used stem shifters to find a set which could take Dad's downtube shift levers. I kept the Arabesque-engraved downtube clamp in case he decides to make this a more aggressive bike as he progresses as a cyclist. 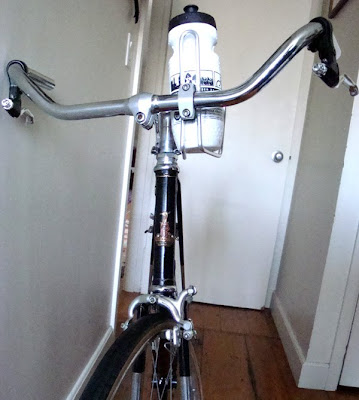 I like the sweep of these handlebars for Dad. I don't know which side the waterbottle is supposed to go on, since Dad is a lefty I put it on the left. 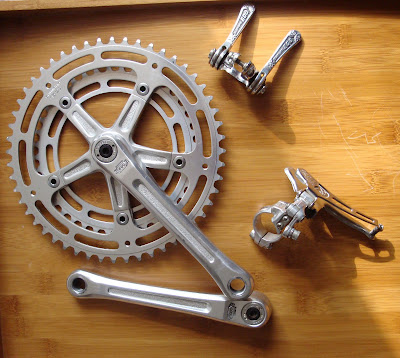 Well, as expected I'm learning so much with this project! This weekend's life lesson was to widen one's gaze. Certainly vintage Campagnolo is stunning, and would be correct for dad's bike, but I discovered a treasure trove of bike jewelry that mere mortals might actually afford: Shimano 600 Arabesque.

Man, is this stuff beautiful! It is the vintage analog to modern Ultegra, and was made from 1978 to 1984. I love the engraving, and the black enamel accents are the perfect counterpoint to the rich black paint on dad's bike.

I have included extra-large photos if you want to click to make them huge. 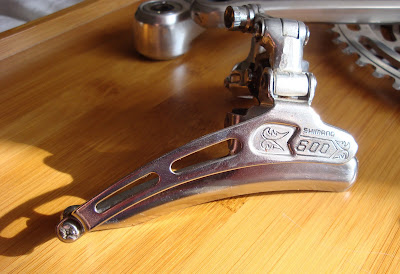 The front derailleur is relatively restrained, when you see the rest of the component group. 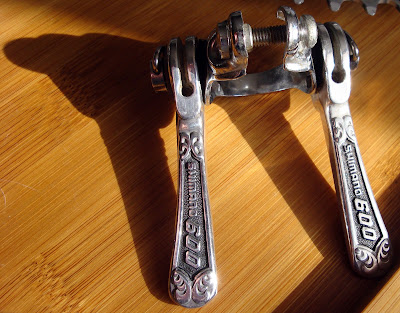 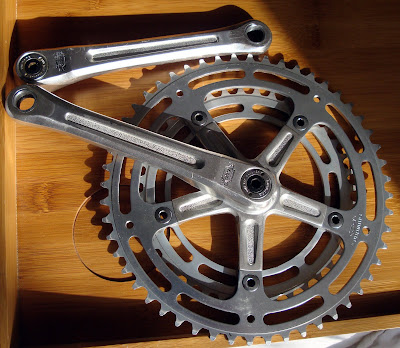 The cranks are in perfect condition, they hardly look used. 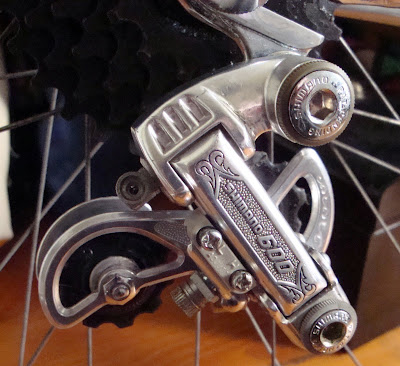 I went with a short cage derailleur because we'll just have a double crankset in front. I hope it will have enough pull. 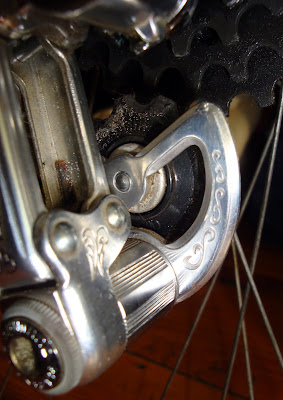 Note the engraving and fluting on the front face as well as the derailleur cage. 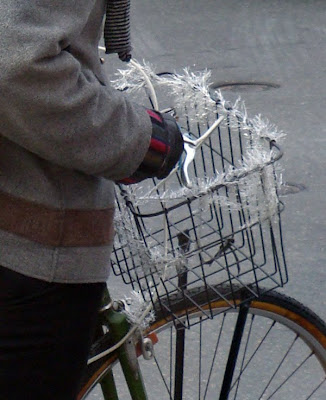 I snapped the photo because I loved the lady's snowy tinsel on her basket, a classy festive accent.

It was only later that I realized how chaotic the rest of the scene had been!

I also see now that she has snowy tinsel all over her bike!
4 comments: