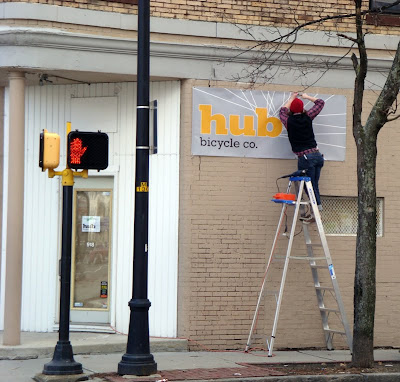 I just happened to be walking by when Hub Bicycle Company was putting up her sign. The owner says she'll be providing full-service bike repair, done by herself, as well as parts and accessories. She'll be opening Feb. 1, so go check her out!

(BTW: with a little internet sleuthing, I think her name is Emily)
5 comments: 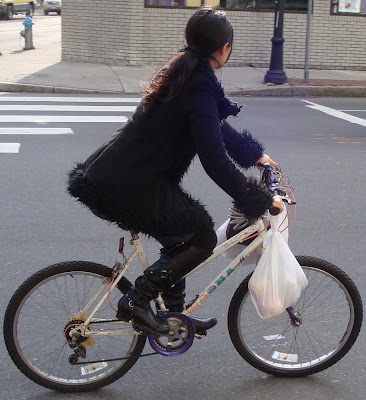 OK, so her pretty hair, sleek boots, and adorable jacket don't really follow the same aesthetic as her bike. But that's ok, she's out in Cambridge in January, getting her errands done and looking good while she does them. I want to point out that when I first saw her she'd pulled over onto the sidewalk to use her phone safely. I think she was getting directions. Courteous and cute, a winning combo!
2 comments:

My dad got the cycling bug big time while he was here in Boston. Last week he was in San Diego for work and has this San Diego cycling report to share:

Cycling in downtown San Diego is a little like Boston except with no separate bike lane. It was cool for San Diego and intermittent rain. Hardly any bikers. Didn't see any bike commuters. Rode around using roadway and sidewalk when available. Cars gave me room. There is a wide promenade along the shoreline which is good for sightseeing, including the aircraft carrier Midway. Rode out to airport to pick up my rental car saving the $12 cab fare... Picked up a bike map put out by the County, but didn't get chance to use it. The bike rental shop was right downtown, two blocks from my hotel. Closed on Sunday so big problem for weekend rental. My car rental was $13/day. The mountain bike was $25/day, $10/hour.

Another sort of Flower Bike 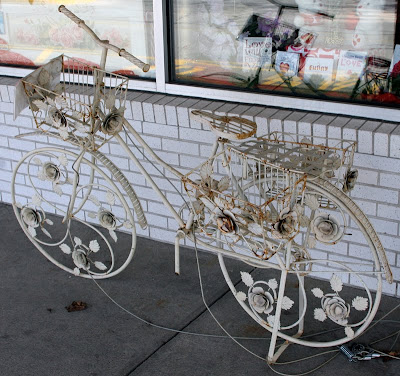 I don't generally go for the decorative bike. I think functional bikes are beautiful enough, I prefer those. This one, spotted outside an independent bookstore on Cape Cod this weekend, made me smile so I wanted to share it. Perhaps I like it because it never was a real bike, never could have been ridden, so being a planter is not degradation. I can't wait 'till it can be filled with real flowers - just a few more months! 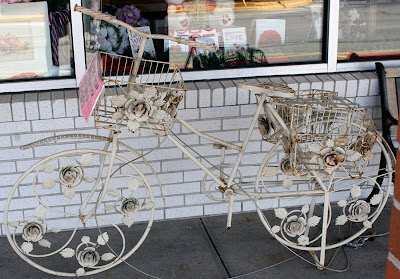 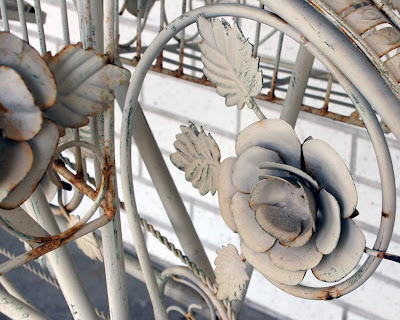 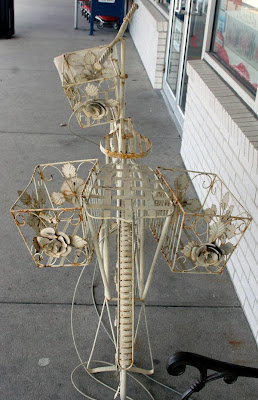 Someone has a sense of humor 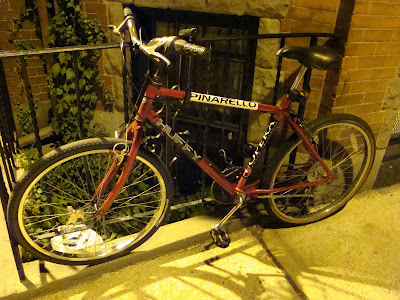 Though not as objectively beautiful as the other "Pinarello" city bike I've featured, this one always gives us a smile when we pass it on Newbury Street.
4 comments: This bicycle has several signs prominently zip-tied to it touting "Metabolix Green Machine". Google doesn't have much information, and I haven't seen another Gary Fisher similarly equipped. I wonder if this is the beginning of that Kendall Square bike share we've heard about? 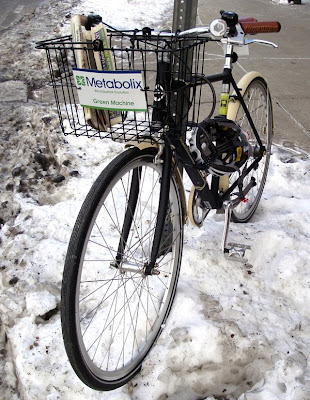 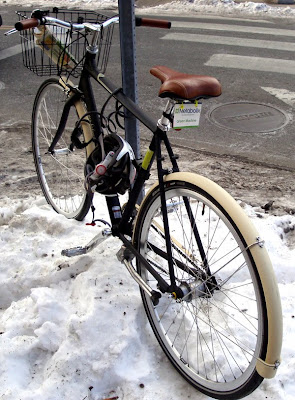 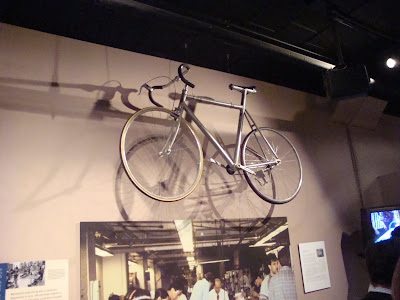 I was at the MIT museum for an energy club function and I couldn't get close enough to the display to read about this bike, but I hope to get back and read more about this first aluminum bike of its kind, the ideas surrounding the creation of this bike went on to inspire both Klein and Cannondale.

The richness of the bicycle history in this area astounds me sometimes. Boston's been part of it all along.
7 comments:

OK, you can tell this photo was taken this autumn. There are no pools of briny snow, and those mums look so cheerful!

I loved this bike for the vivid blue color and the white accents. 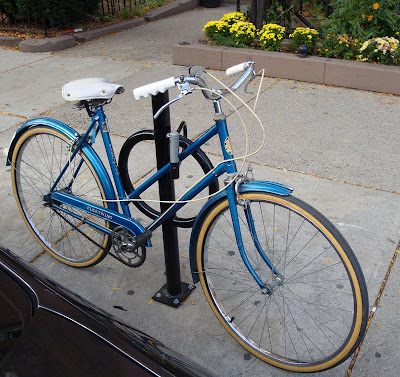 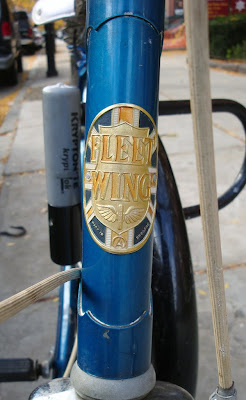 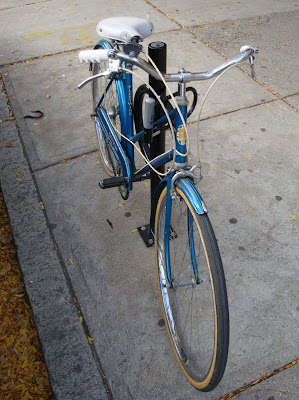 Start of my Ladies Coat Project 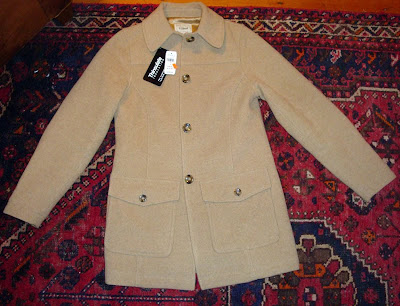 I've been envious enough of my husband's cycling jacket to be on the hunt for one of my own. I finally found what I was looking for in the after Christmas sales. Oh the irony that the perfect cycling coat is currently being called a "car coat"!

I've been wearing the coat since the New Year and it feels strangely warmer than my JCrew Thinsulate coat. It may be because the LL Bean version is much lighter, so the same warmth seems remarkable.

In social lighting the coat does not read as anything remarkable: 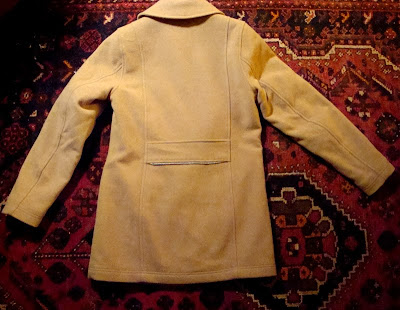 Here the coat is flashed, you can see the one band of reflective tape and see all those seams where I can add more! 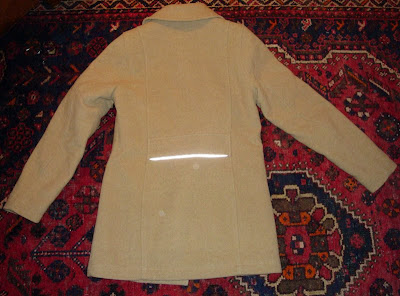 I look forward to getting everywhere bike and still quickly looking almost "normal" (whatever that really is).
12 comments: 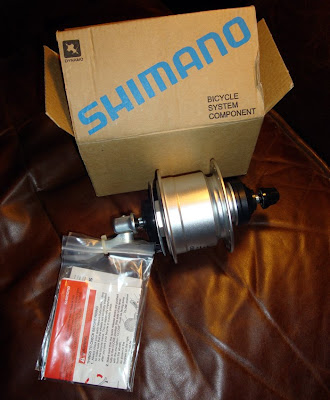 You all know that I have wanted a dynohub for ages. I didn't end up building the SA vintage front hub for a lot of reasons, but that's ok because Santa brought me a Shimano instead!

I am *very* excited.

The remaining challenge is choosing a rim. Here's the scenario I see -

So, what do you wise readers think? Is there a suitable rim that falls between those two uses - sturdy enough for a front wheel year-round commuting, but with enough performance to roll long distances once or twice annually?
10 comments: 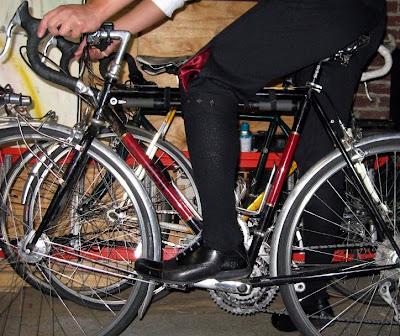 Gentlemen cyclists this one's for you, courtesy of my friend Cris:

For the last few weeks, I have been commuting to work with a pair of knickers from Bicycle Fixation as my main leg garment. Normally I've ridden with standard lycra bike tights or shorts and just changed when I arrived in my office, but lately I've come to miss having pockets. I'd ride with pants, but have never been fully happy with ankle straps and, before you ask, I am not in the market for a chainguard.

To this end, the Classic Wool Knickers from Bicycle Fixation have been a welcome addition to the wardrobe. Made of grey wool gabardine, they blend well into a downtown office setting and the burgundy satin gussets add a welcome bit of visual flair along with some practical benefits. The gussets allow the wearer to pedal a full stroke without feeling like the clothing is binding or restricting, and this makes them more comfortable than a pair of pants that have just been cut to 3/4 length. 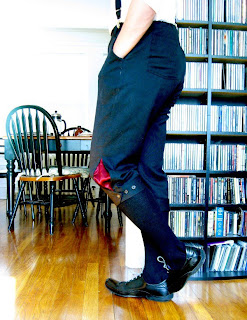 I've owned these pants since November, and have worn them through a wet, cold and windy December. Like most wool garments, they are not waterproof and will retain some water if rained on, but they do dry relatively quickly and cleanly. The garment blocks wind rather well, but I have had to swap my knee high socks for tights over the last couple of freezing winter weeks since these knickers lack any sort of insulation aside from the thin wool fabric.

The only complaints that I have about these pants are the back patch pockets, which aren't quite as elegant as ones that are set in, but that's a relatively minor quibble. I suspect that filled set in pockets might tend to be uncomfortable while pedaling, anyway. With all that said, I love these knickers and they've rapidly become one of my standbys.

I was wearing these knickers when I had stopped by the John Fluevog store earlier this month. The staff at the store were intrigued by the pants and when I was rhapsodizing on their utility for bike commuting, one of the salesperson pointed me to one of their shoes, known as the Westerly.

The Westerly, they explained to me, was a shoe designed by Mr. Fluevog during one of his bike commutes. Like a standard bike shoe, the Westerly has a very stiff, hard sole for optimal power transfer on the downstroke, but unlike a bike shoe, it has no fittings for cleats to let your foot pull on the upstroke -- which is all just as well. Eventhough I have bike shoes with SPD cleats, which are very walkable, I've never been particularly fond of the way cleats scrape against concrete or wooden surfaces. If I expect to do a lot of walking, I'll just ride in regular shoes.

To that end, for regular dress shoes that perform well on a bike; the Westerlys are a good start, but they aren't perfect. They do have some nice features for the fashionable cyclist. The upturned toe naturally places the ball of one's foot on the pedal spindle for optimal pedaling position. The softer leather between the lace and cap is also well suited to work with toe straps on the pedal. As walking shoes they also perform as well as any dress shoe might, especially since the stiff sole is augmented by a strategic use of rubber in the heel and base of the foot.

Still, for life on a bike, I would prefer a monk strap buckle to laces; if only because a strap and buckle are less likely to come undone or get caught in the drivetrain while pedaling. I would also like to see a little more stiffness or reinforcement at the cap and toebox. Cyclists spend an extraordinary amount of time standing on their tiptoes while waiting at a light, and a reinforced cap makes such waits a little more comfortable. Overall, though, while the Westerlys are not a must have by any means, they are a nice selection if one is in the market for dress shoes. 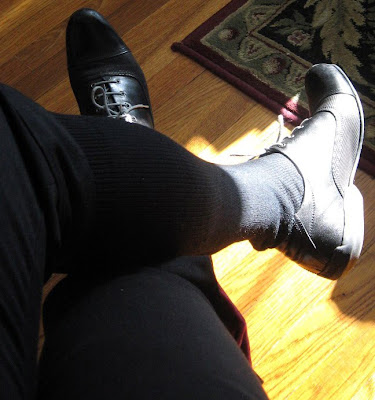 (Can I just add how much I LOVE that the color scheme of the knickers matches his beautiful ANT bike? -Charlotte)
9 comments: I've seen lots of photos of the yellow bikes for the French Post, but I haven't seen any German ones like my friend E has sent us here. Apparently for this one they have extended the frame specially for Berlin and the high-volume routes there. The wheels for the extended frame flipped up so they could bike without them, they can also bike or walk with the wheels down too.

E's boyfriend had one of the regular indestructible German post bikes in his student days.

The internal gearing has to be nice in foul weather, and look at that huge front and rear basket! The chainguard is utilitarian, but still a nice addition.

Spotted on Newbury Street, this subtle but festive bike made me smile: 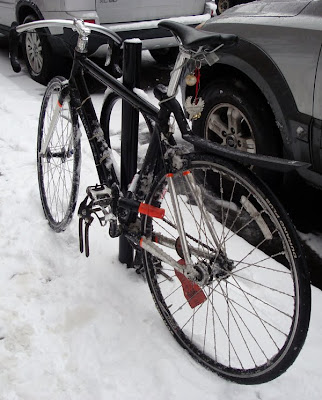