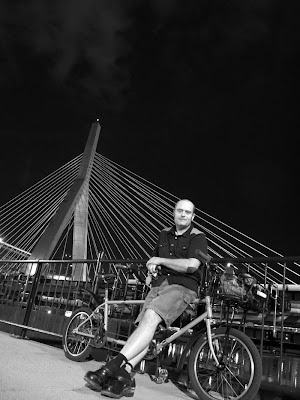 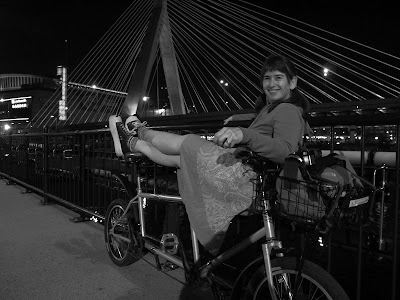 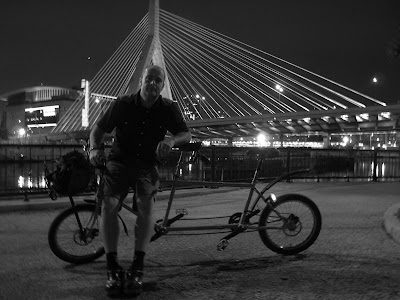 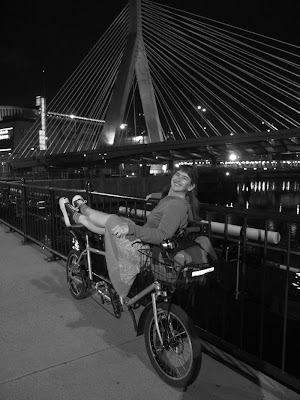 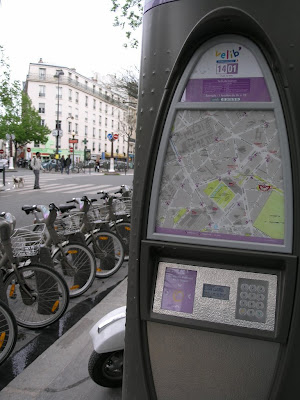 Merci mille fois again to my friend E who sent in these photos a while ago. I'm certainly getting excited to visit France and go out adventuring. I don't plan to use the Velibs since I'll have my own bike with me, but I'll be excited to see how they've changed the city since we lived there. 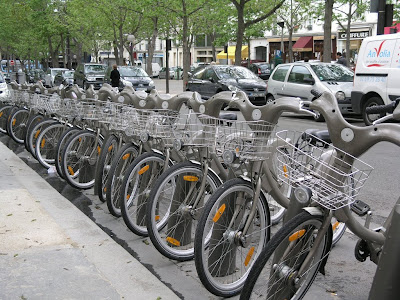 There's something about all the Velibs in a row that reminds me of Easter Island. 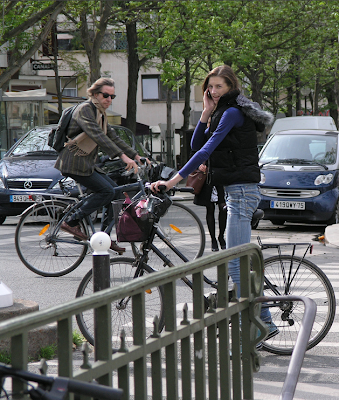 I just love the scarf on the man in the background! 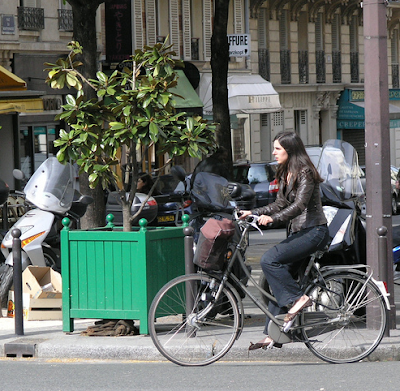 Leather jacket, ballet flats, sweet ladies' frame vélo de ville - this lady has it going on! I like the tonality of her look. 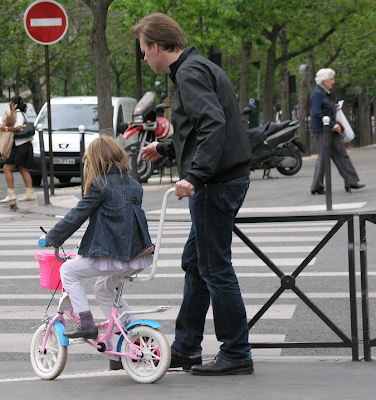 As E points out, a chic cyclist in training. Love her little fenders! 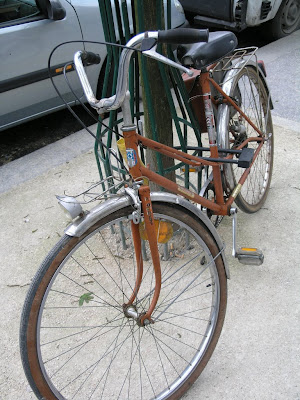 Check out the lugs on this swoopy mixte. It also has great racks and I love that little light on the front fender. Someday I will have one like it.
7 comments: 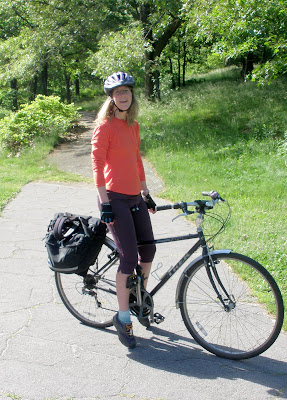 I have been spending some time recently thinking about what the Chic Cyclist who rides long distances might wear. My husband and I are going on vacation in France, riding our bikes from little town to little town. I want to hop off and look chic, but we'll be riding too far for "normal" clothes. This lady (submitted by dotbike) has a nice balance between chic and performance, I particularly like her aubergine knickers.

Anyone have any suggestions for chic sporty gear?
22 comments:

Cue the Beach Boys:
Oh wouldn't it be nice... 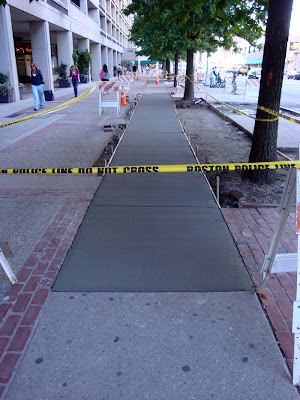 The sidewalk along one of the most difficult parts of Mass Ave is enormous, and they're adding a new swath of concrete. Wouldn't it be nice if that were a bike lane?

We can dream!
6 comments: 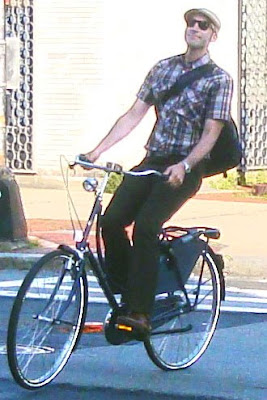 What a handsome chap! I spotted him in the South End last night.
3 comments: For sale on Craigslist Boston, this pretty cruiser has been hand painted to nice effect.
3 comments: Extremely chic photo by christinanicoleb
We've been talking about tandems, but on my second wedding anniversary I'm thinking more about Bike Love in general. There's something about a tandem that says love and marriage, but like I said yesterday - two years ago there were none to be found. I like the symbolism of two wedding bikes also, so in the end it all worked out.

In retrospect I wish we'd thought to take some photos that day with our bikes. The inherent joy is somehow captured in the movement of the bike. A handsome handlebar is a natural prop if you want to do the ring photo. Just remember a handlebar basket for your bouquet. And how about this bicycle tube garter belt!?

I can imagine that this gentleman is using a bicycle wheel as a metaphor for the dynamics of marriage. He's probably talking about how you have to both support and depend upon each other in order to roll along easily, and just keep moving if you don't want to fall over. I love this wedding cake because the bride is carrying the groom on her handlebars!

The bicycle must be a powerful marriage metaphor because there are plenty of other bike wedding photos, invitations, accessories, etc. out on Flickr, Etsy, and the web.


PS. That grain of rice is still lodged in my handlebars. Two years and counting.
4 comments: 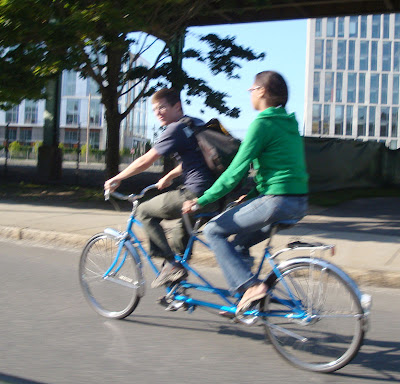 Since I saw the Butterfly Tandem, I've seen tandems all over town - parked in front of grocery stores, parked on the bridge, and this couple who turned off in the direction of the Butterfly Tandem, but on closer inspection I don't think there are any butterflies on that bike. In 2007 I could not find a tandem anywhere. Now they're all over the place.

What a fun trend!
6 comments:

Bikes I saw in Oregon

I had to be in Oregon recently for a family event. We had a nice time but there was very little cycling for me. I did manage to get you these shots. 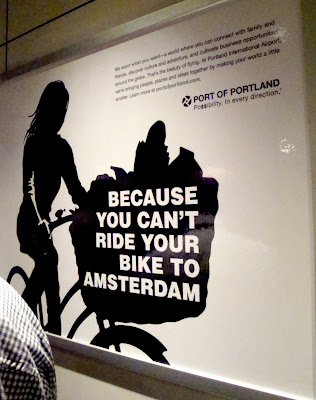 The airport in Portland has cycle chic advertising. It's true, a bike can't get you everywhere... we do need airports. 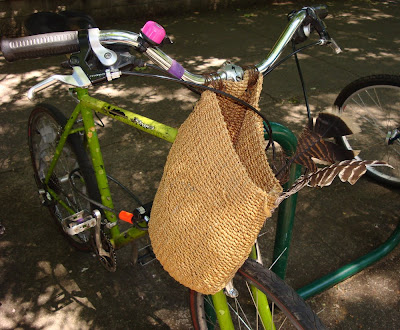 This was my favorite bike I saw in Eugene. Yes, it's a dangerous bag, and would probably be illegal in Massachusetts, but it does look so right in Oregon. 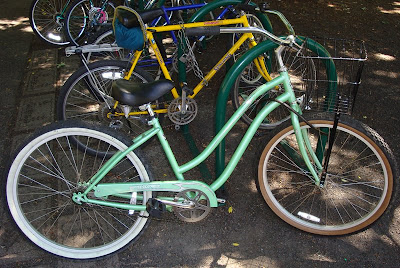 A seafoam green cruiser on campus in Eugene was one of the more fanciful bikes I saw. Most tended to the practical, understandable but less fun. 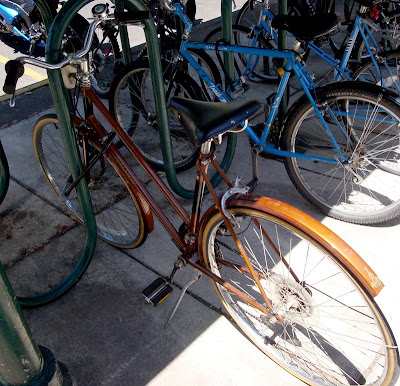 This copper colored Raleigh was one of the only bikes of that era I saw. It's too bad, Eugene is a flat enough city that I could easily see getting around on one of the old townies. 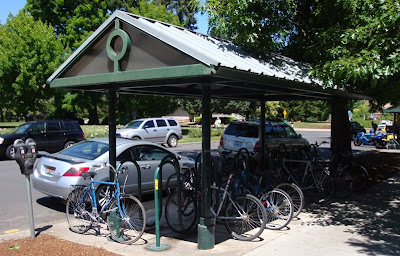 This bike shelter is one of so very many all around Eugene. They were all similarly full. This sort of bike infrastructure is what we're missing in Boston.

Finally, this atmospheric image was taken in Washington State, on the beach. It was getting to be evening on a Friday night, this person was clearly commuting home along the beach bike path. Now that's the life!
5 comments: 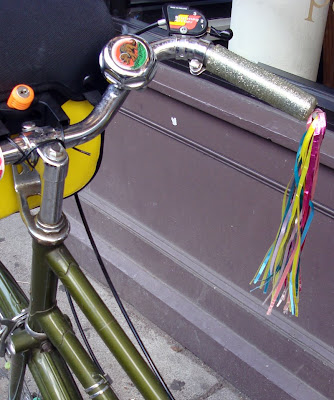 Spotted near Symphony Hall, this old green Raleigh has several nice custom touches, none so wonderful as the glittery grips and homemade streamers. 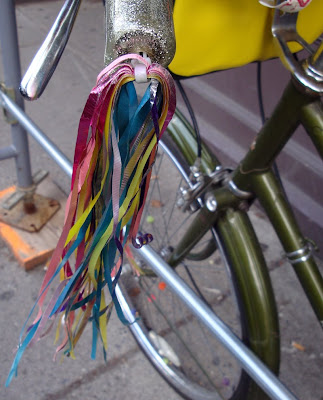 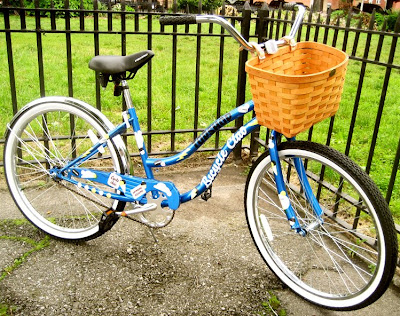 Back in the 90s I was lucky enough, and worked hard enough, to be able to spend two terms in a university in the UK. While I was there I discovered Boots and Topshop. These were my little secrets once back in America, my source of cool and unusual things. Now they've both arrived Stateside and while I'm a little sad about losing my secret source, I'm thrilled to have these resources available.

When I saw that Topshop USA was sponsoring a cycle chic contest I raced to the Chictopia site, which, I must admit, reminded me that I'm not in college anymore.

To enter the competition just register with Chictopia and upload a photo of your best cycling look. Each week five winners will be announced – four chosen by Chictopia.com users and one chosen by TOPSHOP. All winners will receive the special TopShop-designed bike, pictured above. The competition is going on right now and the deadline to submit photos is July 17 so there is still time! Personally, I prefer my bike and would rather a gift certificate to Topshop, but I am gratified to see that cycle chic is catching on all over, with the younger ladies too!
5 comments: 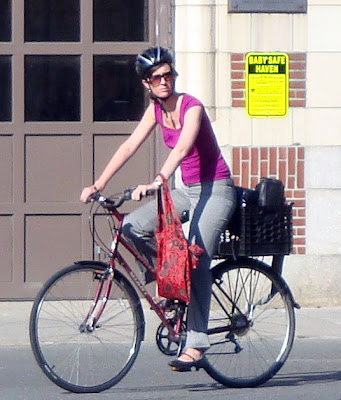 Summer has FINALLY made it to Boston. I'm happy to get out again and see the pretty cyclists riding by. This lady is clearly in her work clothes, yet she manages to carry quite a bit with her on her bike and look good doing it. Well done!
5 comments:

Rain rain go away, come again some other day 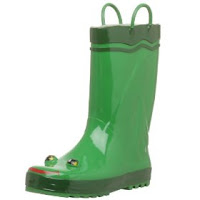 Well, I looked just like this today, except I wore my new Frog Boots. It was fun to splash in the puddles, but as you've all noted in the comments, this blog is getting a bit waterlogged.

I get lots of happy smiles from other cyclists splashing through the puddles with me, but I'm surely not going to take out my camera in this downpour! So you'll just have to take my word for it.

I apologize for the lack of posts, I hope to have a writeup from my trip to Eugene, OR shortly.

In the meantime, anyone else have cheerful rain gear to share?
3 comments: