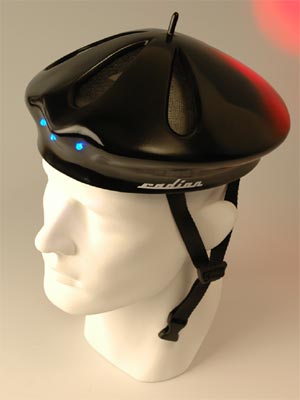 A wise lesson from the Czech Republic, even if it doesn't directly translate.

A reluctance to wearing racing-style bike helmets is apparent worldwide. A Czech design student named Ondrej Stanek imagined what a senior citizen would want to wear - he came up with a helmet which looks just like the traditional "radiovka" beret the senior was already wearing. I particularly how this idea preserves traditional societies and slows the "americanization" of the world. Viva la difference!

However, I'm not sure how helmets looking like traditional hats can translate to the US. A traditional hat in Boston is tricorn, but I don't see people cruising the streets of Boston that way - though I would really love to see that!

I bet Sheldon Brown would have worn a tricorn helmet if one had been made.