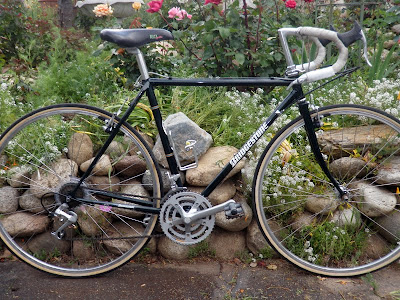 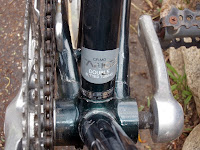 I have a new bicycle! It's not exclusively mine, but that's a mere detail. I know my dad loves me because he's slammed at work and still he took the time to answer the Craigslist ad I found for this lovely 1994 Bridgestone RB-T and bring it home for me.

The Grant Peterson Bridgestones have a cult following I'm only beginning to understand. I look forward to riding this bike and learning more. I have many plans for this bike!

Googling around various groups I found a discussion which included:

Technically, it was never marketed as a dedicated touring model, but as a versatile hilly road/light trail/cyclocross-ish bike. It was equipped with a triple, but a tall road triple, not a touring triple. It has shortish chainstays (but supposedly long enough for panniers - and I think they went longer in 1994), a relatively tight fork offset, two sets of water bottle braze-ons rather than three, and only one set of eyelets front and rear (though I think this varied by year, but there were no front fork low-rider braze-ons). It does have cantilevers and enough room for wide tires. 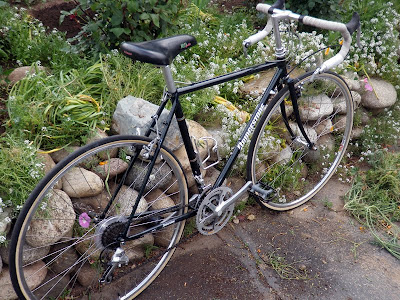 All of this is ideal for the sort of fire road-style riding my dad does, with a little commuting thrown in. This bike will be mine when I'm home, and available to Dad's lady-friend all the time. I personally like the drop handlebars, but for other people using the bike I'm contemplating changing to moustache bars. Thoughts appreciated!

I'm so excited! On to "wayward adventures"!

Congrats on your RB-T! I got one new in 1994 at Farina's in Watertown, MA. I rode it from Seattle to New Hampshire that summer, and continue to ride it around town. In fact, I rode it on the Boston Marathon ride the other week, and it was probably the longest ride I've taken it on since crossing the country (I have few other horses in the stable now...)
When riding cross country, I rode with rear panniers and low-riders up front. I remember weighing the bike (fully loaded) at a rest stop once, and it almost tipped 100 pounds! She can haul whatever you've got.

Wow, Seattle to New Hampshire is more adventure than I had anticipated, but it is a dream of mine. I'm impressed that you've done it (and on an RB-T!)

i know the vintage steel bridgestone road bikes have a loyal following, and from what i've heard, they were very well made. if that were a 24-24.5" frame, i'd be extremely jealous! (i've been looking for a 24-24.5" vintage steel touring frame).

and kudos to your dad for taking time out to fetch it for you!

congrats on such a nice score!

Somervillain, yes sir, the T is touring, though one person has claimed that it is triple.

If it were 24" Dad would have gotten it for himself! :) As it is the price was good enough that he got it anyway. I have only to visit twice and it's paid for (relative to the crummy rental I got last time). If he has friends who ride with him now, well, that's just bonus.

That's a beautiful bike! I had an RB-2 in college, in the early 90's, that I sold without really knowing what it was that I had.
I now have a '92 XO-2 which I absolutely adore! She rides like a dream and is a real workhorse! I actually just wrote about her today on my blog - http://bikingandbaking.blogspot.com

Oh, very nice indeed! Looks like it came in great condition, too!

Would be interested to hear your impressions of drop vs moustache bars, too. I have test ridden a bike with moustache handlebars and did not find them any easier to handle than drop bars. If anything, it was just as challenging, but with a less comfortable hand position.

Wow, nice find! How exciting for you. I look forward to hearing more about your future together.

Pretty pretty! Looking forward to learning more about this model through your blog!

Beautiful, Charlotte!
It's so nice to GO for a bike and then have your Dad finish and seal the deal for you. You must be SO happy!!!
Congrats!