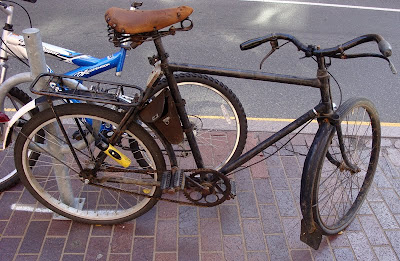 This bike, spotted in Kendall Square, grabbed my attention by being both old and unfamiliar. It may be that it's a mish-mash of parts from many bikes, but I think you'll agree it's an interesting assemblage. There is a lot of evidence that the bike is Swiss, see what you think. 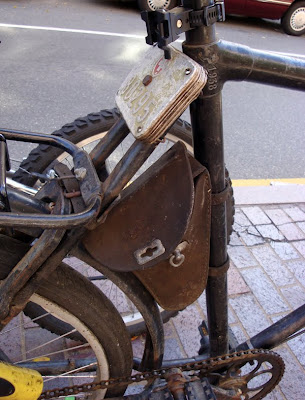 This bag is most intriguing to me. I wonder what he keeps in there? I'd never explored the space between my fender and my seat tube, though I think his fender sits further back than mine. You can see a Swiss cross at the top of the license plate. 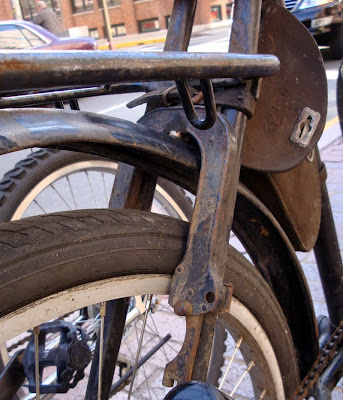 This is an antique wheel lock, clearly it's of historical interest only as he's using a modern U-lock on the bike. 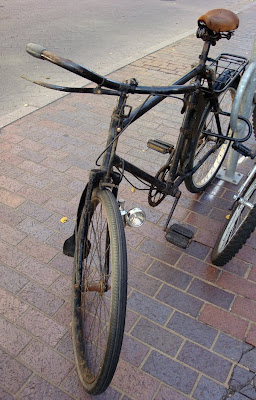 The front angle shows what an exotic bike this is on the streets of Cambridge. 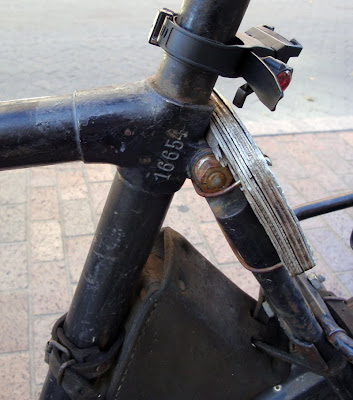 Here you can see the serial number, up where it's easy to read. 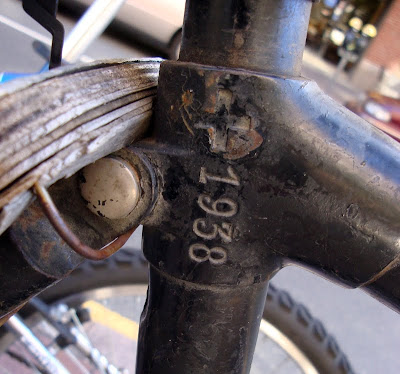 I thus think that this number indicates the year the bike was made. Note the Swiss cross in the lug. 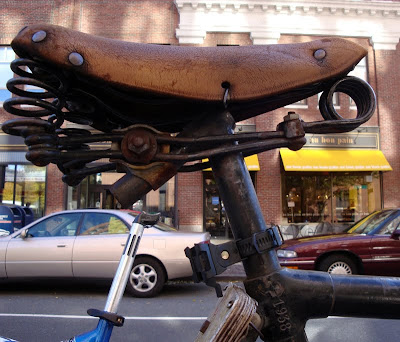 The saddle is old but I've seen them before. The seatpost, however, is new to me. Is that really a seatpost, or did he re-use a stem in an exotic configuration? (yes, the bike behind this one is missing a saddle)

I was going to say... damn! that's a whole lot of clearance between the seat tube and the rear wheel. I almost wonder if that's consistent with the bike's original design or if it's using smaller wheels than normal.

I can certainly say, that the space between one's rear fender, seat tube and seat stays is a perfect spot for holding a bouquet of long stem flowers that may otherwise be crushed in a pannier or messenger bag; but that's the only thing that I've ever transported in that space if only because it's been so tight on all of the bikes that I've owned.

I think the wheels are close to the original size because of the wheel lock. It seemed to just fit the rims inside. I suppose it could have originally been a looser lock if the wheels were meant to be larger.

And that rod brake looks like the really old kind, where the rod is connected to a pad that just pushes on the wheel from the top.

The Swiss cross on the lug, that's amazing.

Also amazing is the fact that the owner actively rides it and locks it down with a Kryptonite U-Lock!

btw, the full story -- do you recall a blizzard around Valentine's 2007? I rode 13 miles to work through that blizzard (just to see what it'd be like) and on the way home remembered, like a guy, that it was Valentine's and on my way through Lexington, stopped at Wilson Farms for a bouquet of long stem roses. I realized only after buying said roses that they were too long to fit in my panniers without leaving them open and, given, the weather, keeping the panniers open was not an option. So I stuck them between my seat stays, stem ends wedged between fender and seat tube.

When I got to Arlington Heights, a trio of teenage girls were waiting by the bus stop, shivering in the cold. I stopped at a red light and one of them looked at me and said, "Mister. You're the sweetest crazy man I've ever seen."

I think you have a good point about the rim and lock. I'm guessing folks just preferred bikes with longer wheelbases back then.

Filigree, does that mean the rod brake turns into a corkscrew, and the regular brake into a pair of tweezers?

You're right, it is a Swiss Army Bike. I hope to have some news soon about Montague USA, but that's another post...

Cris, the story gets better and better. We were attempting to fly out of Logan on 2/14/2007, I remember that blizzard well. I can just imagine the girls at the bus stop, I know they were all jealous.

On the seat post, that's original, but it should be turned the other way, so that it looks like a "7" from the left side of the bike. It makes it possible to adjust front/back quite dramatically. Somewhat common on pre-WWII bikes. My Runwell has the same post. I never thought to turn it backward like that.

Here's a bunch of photos of another Swiss Army bike.
Looks like your find just has his seat post turned backward.
That page says that the rear hub has both a coaster brake and a cable actuated drum brake. Unusual.
At first I assumed the leather bag was a holster, but it appears the Swiss are more intelligent and resourceful than that -- tool bag.
I found a photo of a rather new version of the wheel lock as well.

Great blog, by the way. I just found it through that Gwadzilla guy.
Bookmarked.

Wow Cris! That is so romantic... *swoon* indeed!

I work right in Kendall Sq. I'll have to keep my eyes out for this bike! I hope I can see it in person!

Never seen anything like it -- thanks for sharing. It's great that the bike is still being used.

Charlotte - If you like this bicycle, you need to look at the photos of "collectvelo" on Flickr. He has the most beautiful collection of vintage bicycles I have seen online so far, and he photographs them meticulously.

Se here and here! I am in awe.

Having lived in Switzerland (as well as Cambridge), I have seen a number of these old Swiss Army Bikes in private use. The Swiss require a license for each bicycle. This one looks to be really old, as it does not indicate the Canton (State) on it. The new licenses are just stickers, and they don't have the Cantons on them anymore either. These days, the licenses are a form of mandatory insurance. Everyone is required to pay, and the fund is used in the event of an accident.

That front brake is quite the thing! I hope the more recent Swiss Army bikes upgraded that bit... :-)

Fascinating to see such a, well ... antique, a beautiful bicycle.

Definitely a Swiss Army bike! I just picked one up myself, complete with all the bags and registration plates. The bike is incredibly smooth and rides a lot lighter than it's 60 pound weight would suggest. I have my seatpost turned around as well. I only have a 30 inch inseam and still found the seat to be too far front with it angled the other way.

That one looks like the MO 05 model and the chainring was used on bikes manufactured by Schwalbe.

Fire up your Google translator and visit this website. It's mostly in Dutch and German and contains a lot of information about these fascinating bikes made for almost 90 years with very few changes.