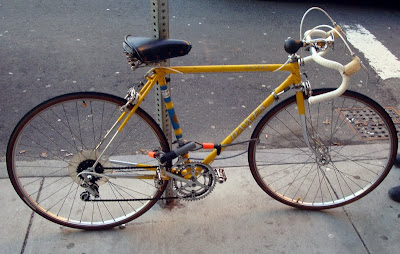 This tiny yellow Dawes Galaxy can often be spotted downtown where I always say hello. It's a tiny bike, as you can see from how short the headtube is, it's almost too short to allow those elegant lugs.

The bike is essentially original and in very good shape. I don't know if the bulb horn was stock on a Galaxy, somehow I think that was added! 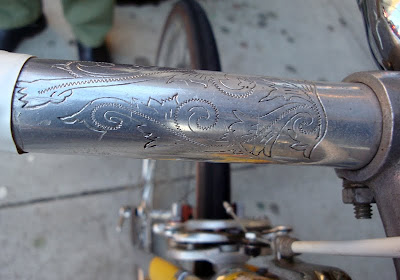 My handbuilt Dawes shares many of these same components, despite being a later non-Galaxy model (probably a double five). Mine also originally had engraved drop handlebars, though mine were not as fancy as these beautiful bars. 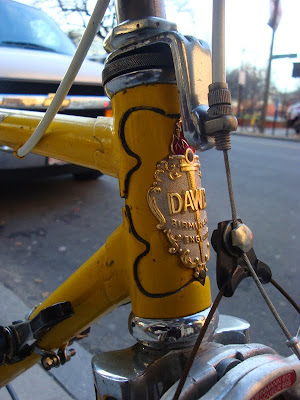 Here you can see the older-style Dawes torch headbadge (which my mother's bike also sports), and the Galaxy's original fork. I adore the gold swirling edge on that badge. My lugs are more elaborate, but I have a similar headset (and need to replace it).

A cute, cheerful vintage bike for sure!

Welcome back, Charlotte! Looking forward to another season of inspirational posts.

Somehow I think of the Dawes you saw as the male English cousin of the Mercier Velouria (of "Lovely Bike!" fame) just purchased. Isn't amazing that mass-produced bikes had such fine detailing? And, you're right about the lugs: Rarely does one see such nice ones on such a small frame.

Wow- that bike has some lovely details. It's funny, partly because of the saddle being kind of clunky it doesn't draw the eye immediately, but as you get closer- it's really fantastic

My God, even the handlebars are beautifully etched - breath-taking!